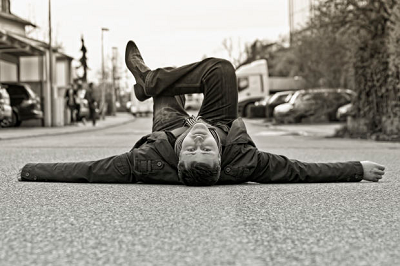 Before I started making money online, I had a lot of crappy jobs…but one was a lot worse than the others.

It wasn’t the time that I was a CSR for a terrible company. Or the time I worked in a gym where I was stationed at the towel stand outside the sauna (oh, the nasty nudity!). Or even the time that I worked in the office of a water treatment plant in the California desert that only had a port-o-potty for a toilet (have you ever smelled the air at a water treatment plant? it made the desert port-o-potty smell good!).

Before I tell you the actual job, let me give you a little history on me.

I’ve been in the workforce around 15 years or so, and when I say workforce I mean just working for money not going into a day job. In that time, I have gone through a lot, and I do mean a LOT, of jobs.

You see, I’ve always had a problem with authority and never really seemed to last too long with any employer for that reason. In fact, my longest job was actually only my second job, which I had in high school and college for a grand total of around three years. Of course, I’ve been working online for much longer than that, but working for yourself is much different.

After that three year stint, I have never held a “real” job for longer than 1.5 years, with most lasting between 6-9 months. Of course, some jobs are worse than others. And sometimes, you actually have to stay at a terrible job until you find a replacement one, lest you go hungry.

My absolute worst job was, unfortunately, during a time of minimal monies in college. This means that I had to keep that job much longer than I liked.

So, what was that job?

Honestly, I don’t remember the job title but my primary duty was this: take the chicken off the rotisserie and pull the meat off the bones.

It was at a Boston Market in Orlando.

And, it didn’t matter that the chicken was damn hot since it was fresh from the rotisserie. I wasn’t allowed to use a knife or any other type of utensil to remove the meat. Just hands in a pair of those thin rubber gloves. The kind that offer no protection from chicken meat so hot that it felt like it came straight from the fires of hell.

As if that wasn’t torture enough, imagine coming home with greasy fast food chicken smell every day. It even made my car reek.

Whenever I have a frustrating day of making money from home – such as problems with my internet connection or the kid next door who bounced a basketball outside for 10 hours last Saturday which interrupted my entire work day – I just think back on how bad day jobs can be in comparison.

Even the shittiest day of making money online doesn’t leave me smelling like fast food chicken grease and with hands eternally red from the hot chicken meat burns. And best of all – no asswipe manager hovering over my shoulder.