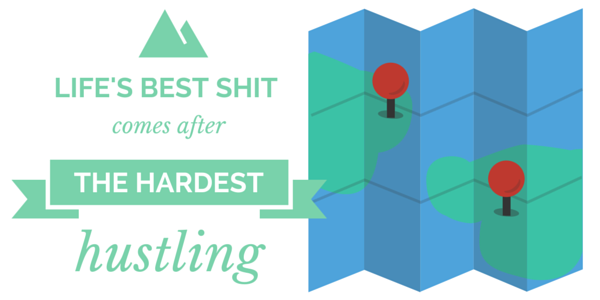 If you waste as much time as I do on forums online, then you see a lot of people talking about living the laptop lifestyle…and a lot of haters claiming that it’s bullshit and can’t be done. As I keep seeing these recurring threads, I have noticed a trend –

>> Most of the “I’m living the laptop lifestyle” digital nomads are people who have left places like the USA and UK and are taking up residence in Southeast Asia where the living is dirt cheap.

Here’s the thing – do you really wanna uproot and move to SE Asia just for the freedom of not having a cubicle job? I’ve been to SE Asia. Some places are really nice, some just okay and some are third-world hope-I-don’t-get-a-disease dirty. And there’s no denying that the fast (and cheap) internet there, as well as the damn delicious and crazy cheap food, makes it rather appealing.

But when I started out trying to make money, it was so that I could spend my time in places like Dubai, London, Amsterdam and Paris – not Vietnam, Cambodia and Thailand. And hey, I’m not knocking the people who enjoy tooling around SE Asia, like Rob Cubbon and other bloggers. Like I said, I’ve enjoyed the times I’ve visited that part of the world.

However, that’s not what I want. It might not be what you want. And that’s cool because you CAN make enough money from websites and other online ventures to travel the world or do whatever the hell you want – and you can do it in style.

I spent 2014 enjoying the hell out of a round-the-world trip. I spent most of that time in Europe and the UK. I even splurged on some business class flights. I stayed in a few five-star hotels. I rented some posh luxury apartments. I did whatever the fuck I wanted to do because my websites were earning me enough to allow for that kind of living. That’s what the laptop lifestyle means to me. And yes, you can really live it as long as you put in the work to make that shit happen.

Right now, I’d point to niche sites as being the easiest way to scale up your lifestyle and start earning some stacks online. After that, it would be a service oriented business – like if you’re a kick ass graphic designer who can work from anywhere.

What are you waiting for? There’s a coffee shop in Milan waiting for you and that laptop.