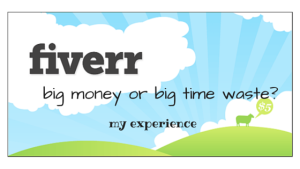 I’m always looking for ways to make money online. And I’m kinda lazy, so if there is the possibility of a shortcut, then you bet your ass that I’m gonna see if it works. So, after seeing countless Kindle books on making hella cash with Fiverr and podcasts like this one, I just had to give it a try.

All the guides suggest that you offer a gig that takes you 15 minutes or less to fulfill, otherwise you end up with a terrible hourly rate. But, if you can do the gig in that short amount of time, then you end up with an effective $16/hr rate. Sure, it’s not the highest hourly rate, but it’s not too shabby either.

I took a look at the marketplace and decided to offer a gig running reports with SEMRush and a gig with reports from Ahrefs. After a few easy sales, those gigs were shut down. Apparently, the people over at SEMRush and Ahrefs don’t like it when people piecemeal their services like that.

I didn’t let that deter me – I immediately re-created the gigs and got a few more sales before they were shut down AGAIN!

So, I tried a third time. I thought I would be sneaky and never mention the services in my gig title or description but use “semrush” as one of the tags for the gig. That worked except the sales were pretty much non-existent. I’m assuming that the gig tags aren’t taken into account for searches on the site?

I know a guy who has a successful writing gig on Fiverr where he farms out the work to someone in the Philippines via Odesk.  This type of Fiverr arbitrage seems like an easy way to make a few bucks, but I’m honestly not sure it’s worth the headache of dealing with Odesk writers.

At the end of the day, I’ve come away from this little experiment just $48 richer for my troubles. Was it worth it? Not sure, but that steak dinner I’m gonna buy with the funds will taste might good.

I think you probably can create a good money funnel from Fiverr, but it just wasn’t in the cards for me.